The purpose of the “Mercedes-Benz Art Scope” program is the training and international exchange of leading artists in the realm of contemporary art. It has been implemented for over 30 years since 1991, as part of Mercedes-Benz Japan’s activities supporting culture and art.

Up to now, a total of 35 young artists from Japan and Europe have taken advantage of the offer to stay abroad for about three months, and create new works as artist-in-residence based on that experience.
“Mercedes-Benz Art Scope 2022-2024” was launched as a new program in 2022, as part of which artists who have previously participated are invited once again, to create and exhibit new works. Tsuyoshi Hisakado, who participated in the program between 2018 and 2020, was invited for a one-week residency in January 2022 at “EQ House,” an experience-based facility for showcasing new connections between mobility and living, and produce a work based on his experience.

Taking “nature” and “civilization” as keywords, Hisakado sets up conceptual spaces combining such varied elements as sound, programming and painting, with a focus on aspects of sensibility, uniqueness and timelessness as fundamental components of human activity. Below is a report and interview in the review of his exhibition as part of Roppongi Art Night on September 17 – 25.

Hisakado’s studio is located amidst a landscape dominated by rice fields in Kameoka, Kyoto. He started the conversation by describing how rain sometimes makes the mountain paths in the area impassable, adding that he feels in this “the ferocity of nature,” whereas, from a natural point of view, it is at once “nothing more than a phenomenon of the ground being soaked and water overflowing after heavy rainfall.” “From a human perspective, it may feel as if civilization is being destroyed, but just like our skin produces scabs after bleeding, one can see this as nature’s own way of healing its wounds. The offer to join this project came at a time when I was pondering from such rather comprehensive viewpoint, how it may be possible to depict in beautiful color gradations the connection between nature, human civilization and intellect, as something that surpasses these things by far.”

Displayed on the walls of the light-flooded “EQ House” are large photographs of waves, sand, rocks, snow, and smoke rising from a geothermal power plant, all of which were taken in 2018 when the artist made a trip to Iceland during his stay in Berlin. Here they are juxtaposed with new paintings that contain such additional artifacts as a spiral-shaped object created by writing down the endless digits that make up the number “Pi.”

Inspired by such natural phenomena as the spray of waves, Hisakado’s painting techniques include “sputtering” and “dripping.” In this particular work, the painted “nature” is superimposed, or covered in a way, by the helix that represents Pi as a symbol of “civilization.”

It is said that this number – roughly 3.14 – had been calculated as early as in the ancient kingdom of Babylonia, which shows for how long studies around Pi have already been conducted. “I’m feeling a connection between the endless number Pi, and the desires of civilization that have a beginning but are just as endless.”

In another work, robot arms are performing some kind of operation, while a Rubik’s Cube is placed on a bed in a separate room. Among a soundscape of field recordings made in Iceland, the sounds of the Rubik’s Cube being rotated are momentarily audible. TAKENAKA CORPORATION, which was also involved in the design of the “EQ House” itself, collaborated again on this work, designing a robot that continuously plays with a Rubik’s Cube. Here the Cube is taken out of the robot’s hands, which results in a “gap” between the “problem” and its “solution,” creating a narrative in which the endlessly working robot arms represent the earth itself as it continuously grapples with its problems.

Asked about the origins of his interest in the relationship between nature and civilization, Hisakado explains that it was primarily triggered by his experience of earthquakes – the Great Hanshin-Awaji Earthquake during his junior high school days, and the Great East Japan Earthquake when he was working for a company in Tokyo. “Looking at the collapsed furniture and things being scattered across the floor, made me think about my future. The work I was doing at the time was related to the design of mass-produced articles, and I did feel somewhat uncomfortable about that.”

“I also did some research about the mechanisms of earthquakes, during which I developed the idea that the movement of tectonic plates was perhaps the earth’s attempt to put itself back in a comfortable position. The two plates that begin at Iceland move around the globe, and meet again to collide on the other side, where Japan is. We tend to measure time by human standards, but these crustal movements are taking place over an extraordinarily long period of time. I began to feel in this a kind of power that temporarily pauses or resets civilization that has already gone too far.”

That’s how the artist first became interested in Iceland, and seized the opportunity to travel there during his residency in Berlin in 2018. There he was deeply moved when looking at cracks in the geological strata, undulations in the ground caused by the collision of tectonic plates, waterfalls on both sides of such elevated areas, and the erosion caused by those waterfalls, which appeared to him as manifestations of the pure rationality of nature.

“In Berlin, recycling works well, and in Finland or Denmark, response to environmental issues is quick. Compared to that, I realized that the structure in Japan, where the high population density makes it difficult to reach agreements, results in delayed decision making.“ Through his research, starting off from natural aspects, he got fascinated by the way the activities of humans and nature interact with each other one by one.

In a world where solving problems by facing them squarely is considered to be the right way, Hisakado defines the appeal of art by referring to “the shift in perspective that emerges when looking at things from an angle.”

“The future is something that constantly moves, so I think it is only naturally that the pieces don’t fit right away. It would be scary if you could solve the Rubik’s Cube in an instant, and don’t you agree that, in moments when everything worked out well, it feels as if the universe stands still? Paradigm shifts don’t happen suddenly. All we can do is move on while making one decision after another, and it appears to me that this is perhaps the only way the world comes together.”

Hisakado further explains that he wants to “adopt a time frame as large as that of continents being created by piling up gravel that is carried by rivers.” Especially the “collages” of scraps of paper in his paintings of “Pi” evoke a sense of “restoration.” I recently visited a village in the Tohoku region where restoration work has been going on for eleven years since the Great East Japan Earthquake. The locals, who live mainly by fishery, have been making efforts to create a beautiful environment for a greater variety of marine life to coexist, as they understand that it won’t help to blame the sea. The works on display may also be superimposed on such human narratives that come together step by step. 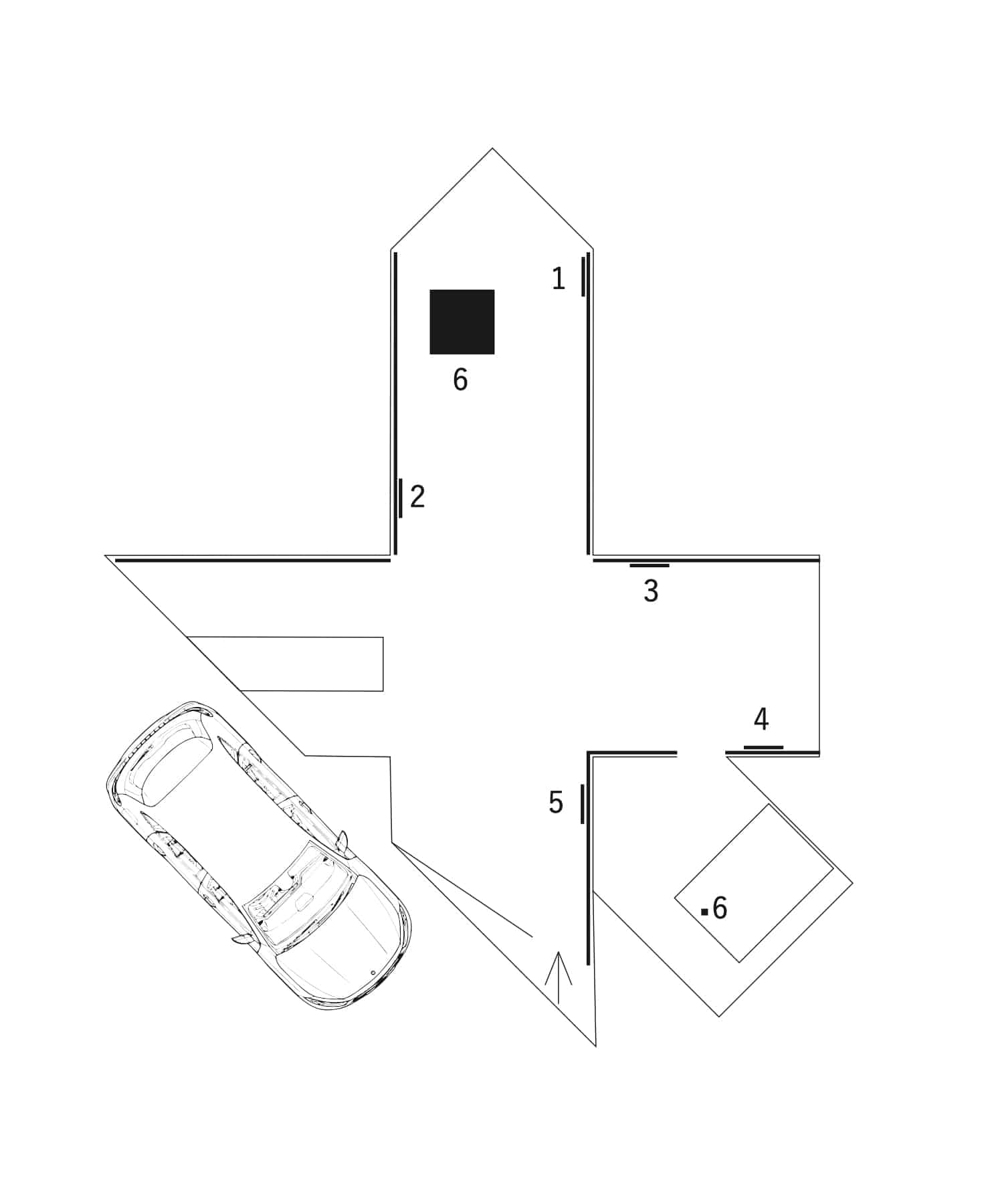 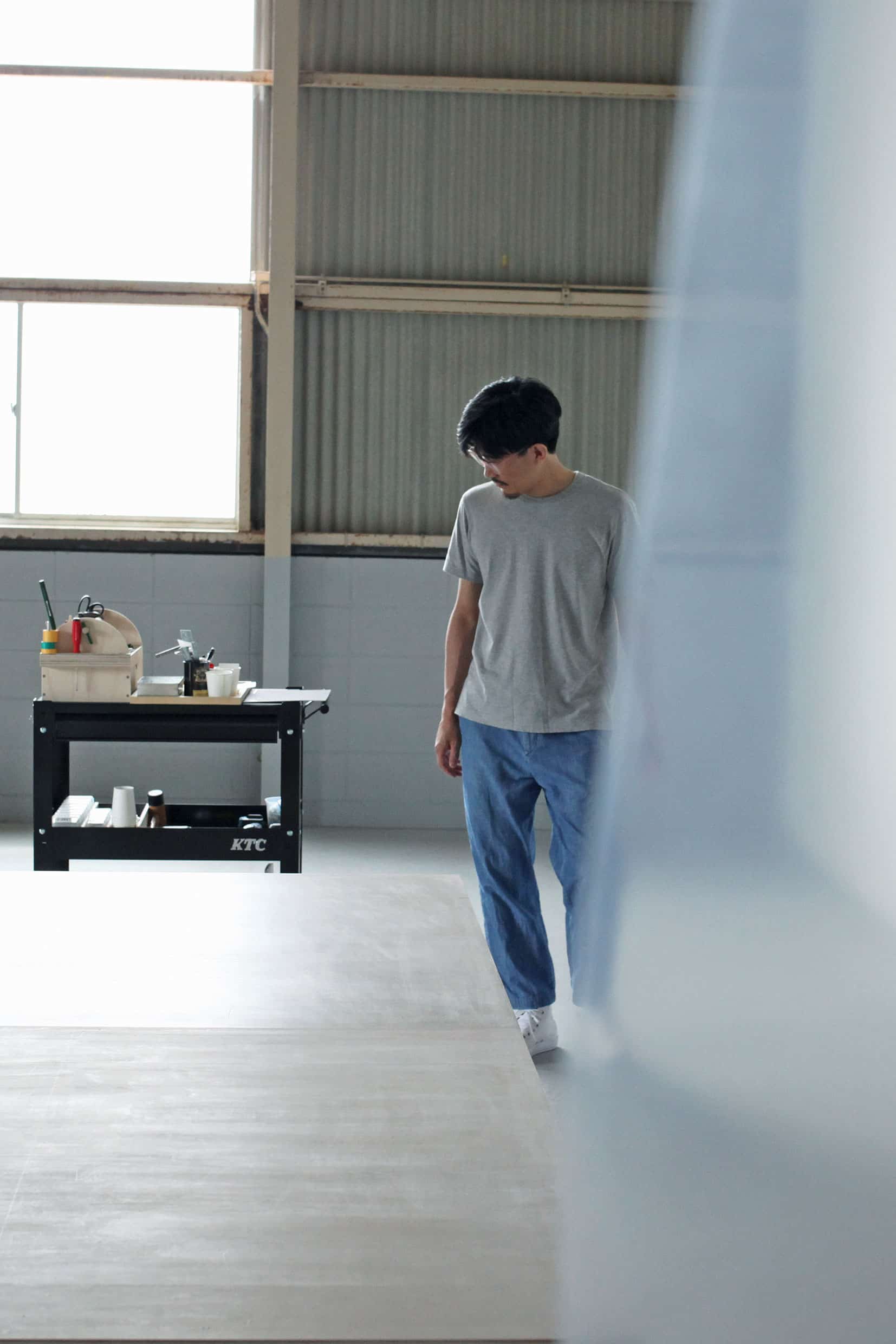 Born in Kyoto in 1981, Tsuyoshi Hisakado completed his M.F.A. at the Department of Sculpture, Kyoto City University of Arts in 2007. With an interest in the fundamental sensibility and uniqueness/eternity that constitute human activity, Hisakado creates conceptual works using a variety of methods and media, including sound, light, programming, sculpture, painting and large-scale installations. The artist hopes that his works resonate with the viewer’s memories and imaginations and sharpens their visual and auditory senses. In 2020, Hisakado held his first museum-scale solo exhibition at the Toyota Municipal Museum of Art, Japan. Hisakado was elected the East Asian Cultural Exchange Envoy and has been awarded the ‘Mercedes-Benz Art Scope 2018-2020’, the Audience Award at the ‘NISSAN ART AWARD 2015’, and the Grand Prize of the ‘VOCA 2016 The Vision of Contemporary Art’. He has participated in various group exhibitions including the ‘Hawai‘i Triennial 2022 (Hawai’i, 2022)’, ’58th Venice Biennale 2019: May You Live in Interesting Times” (Venice, 2019)’, ‘Asia Corridor Contemporary Art Exhibition (Kyoto, 2017)’, ‘AICHI TRIENNALE 2016 rainbow caravan’ and has held solo exhibitions at ‘MoCA Pavilion Special Project (Shanghai, 2016), Ota Fine Arts Singapore (2015) and Ota Fine Arts Tokyo (2018).