Stay in Berlin – Art that encapsulates the memory of the city

As part of the “Mercedes-Benz Art Scope” program that Mercedes-Benz Japan has been implementing for more than thirty years with the aim to support artistic and cultural work, up to now, a total of 35 artists were given opportunities to stay, create and exhibit works overseas. Meiro Koizumi participated in the program in 2009, and his stay in Berlin and the subsequent exhibition opened the door for him to an international career as an artist. Mainly operating in the realm of video while employing uniquely dramatic techniques, he also works with a variety of other media, to explore the relationships between human individuals, states and other communities, and the mechanisms of the human body and affection. In recent years, he has further expanded his range of activity, to include works that incorporate elements of virtual reality.

“It took me a long time to find a place that is spacious enough, and that I can use however I want.” At his atelier, Koizumi is also planning to host talk and screening events.

At the time when Koizumi was sent to Berlin, he had only just started working as a professional artist a few years earlier. Berlin is one of the epicenters of art in Europe, with numerous museums and galleries, and countless artists living and working in the city. While his exchange with them was greatly stimulating, the artist remembers that the city of Berlin itself had an even bigger impact on him.

“The memory of the events this city has experienced in the past, is still alive today in its architecture and monuments, and the entire city felt like one magnificent historical museum. I remember walking through the streets and being inspired by seeing how history is confronted here, in a way that couldn’t possibly be done in a society that, like the Japanese, tears down and rebuilds houses in quick succession.”

Collaboration with the artist’s father, who draws a B-29 bomber that he had seen as a child, onto the wall during his visit to Berlin.

He walked around monuments that remind of things like the Berlin Wall and the Holocaust, and on his jogging route, he passed by the buildings that Hitler once used. There was a relationship between art and society that he first noticed when placing himself within the history that had accumulated there.

“Different from watching art in the extraordinary setting of a museum, here you encounter monuments while walking in the streets, so art and everyday life are much closer together. Art is being used here as an apparatus for storing memories of the past. I felt that there exist forms of art that are rather close to human activity. This inspired me to adopt a rather challenging approach also in my own creative work, wishing to create art that functions in connection with human daily life.”

In order to find out to what extent it is possible – if at all – to re-experience negative history, he traveled from Berlin to the Auschwitz Concentration Camp in Poland. The visit to this place, where tragic things had happened in the past, was an experience that was extremely shocking at first. But after being there for half a day, Koizumi got used to that shock, and realizing that was in itself another shocking discovery.

“The unimaginable tragedy had taken me to the limits of my own imagination, and confronted me with the difficulty of expressing negative history. However, that experience itself was not a negative one. Once I understood that there were limits, I became aware that I must challenge the boundaries of imagination, by continuously working as an artist, and creating artworks using all kinds of media. That was in 2009, and I feel how this awareness still continues to inspire my work today.”

In “Art Scope 2009-2011 – Invisible Memories” at Hara Museum of Contemporary Art in 2011, which showcased the results of the residency program, Koizumi presented two war-themed video works. Making creative use of the characteristics of the exhibition space and its low ceiling, he adjusted the acoustic and visual settings to communicate even minute facial expressions and manners of breathing. That exhibition, for which Koizumi was allowed to “operate freely and without any restrictions,” caught the attention of a curator at the Museum of Modern Art (MoMA) in New York, which eventually led to a solo exhibition at the MoMA’s Project Space. In 2012, Koizumi made it to the shortlist for the Future Generation Art Prize that is given to artists under age 35, which was followed by invitations to various international exhibitions. This is how Mercedes-Benz Art Scope functioned as a springboard for Koizumi’s international career as an artist.

“Considering my limited experience at the time, the sudden opportunity to hold an exhibition at MoMA was a big leap for me. I am thankful for the chance to move up the career ladder, that this program has given me.”

The role of art and culture in the post-Covid society

In July 2020, when the world was shaken by the spread of Covid-19, Koizumi once again exhibited his works at Hara Museum, this time as the artist featured in “ Mercedes-Benz Art Scope 2018-2020.” Unable to move around freely during the pandemic, and having a hard time creating works in that uncertain time, he forced himself to keep on, and commenced work on a new piece that was not based on imagery.

“It was a time when nobody knew what was the right thing to do. I couldn’t meet people and shoot movies as usual, and that situation also resulted in the new routine of staying at home and communicating via the computer screen. Rather than showing video works, I really wanted people to experience the actual, physical space at the Hara Museum.”

Anti-Dream #2 (Statue for the Celebration)
2020 Sound sculpture to be listened in the crowd​, and to be spread around Sound download link at meirokoizumi.com Photo: Keizo Kioku

The result is Anti-Dream, a work that stirs the viewer’s thoughts and senses by the hypnotic effects of sound and light. In addition to an installation version to be exhibited at a museum, Koizumi also made the audio available for download so that people could listen to it on the go. Translating the uncertain situation during the pandemic itself into a work of art, was also an experience that determined the direction of his subsequent works. Most recently, he has been creating VR-based works that intervene in the viewer’s imagination through sounds and visual effects, and works that incorporate elements of hypnosis, with the aim to reveal the complex mechanisms of society and language that human perception is subject to.

Having experienced art that is close to the people in Berlin, and after that, communicated with people at various places through his own works, Koizumi discusses in lucid words the relationship between art and society, and the role of the artist in the unstable post-pandemic age.

“Culture is an infrastructure that is essential for the generation of social values. Depending on the culture (program) that is introduced to a society, it can either lead to war or create peace. Programs can encourage discrimination, but on the other hand, values that promote tolerance and diversity can be nurtured through culture as well. Society is established upon images, and it is the job of an artist to work with those images. I continue to ponder the question how artists can contribute to the creation of culture that respects diversity, and that protects the environment.”

Above that, Koizumi also expresses his expectations toward those in the position to support culture.

“Culture is sustained in a situation where various creators are receiving support, and diversity is being protected. This is also what can help create peace and a better society. It may sound naïve, but this is what I believe.” 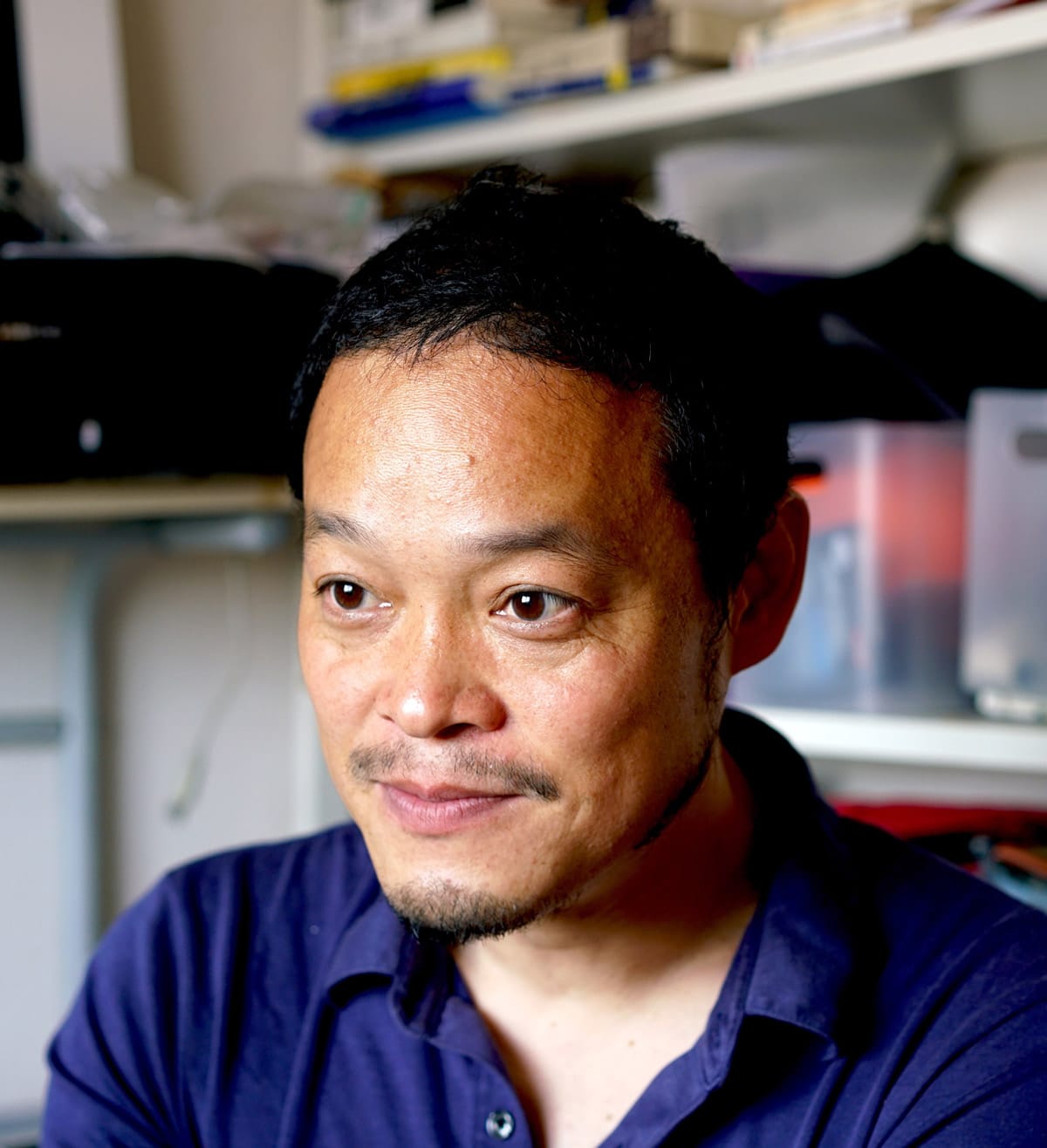 Born in Gunma, Japan, in 1976; lives and works in Yokohama, Japan. After graduating from International Christian University in Tokyo, he studied art at the Institute Chelsea College of Art and Design in London and Rijksakademie van beeldende kunsten in Amsterdam.
His video installations are often based on performances and constructed scenarios, investigating the boundaries between the private and the public, a domain of specific importance to Japanese culture.
His solo exhibitions include “Dreamscapegoatfuck” at MUJIN-TO Production (2019), “Battlelands” at Perez Art Museum Miami (2018), “Trapped Voice Would Dream of Silence”, Arts Maebashi, Maebashi, Japan (2015) and “Project Series 99: Meiro Koizumi” at Museum of Modern Art, New York (2013). Recent group shows include “Listen to the Sound of the Earth Turning: Our Wellbeing since the Pandemic”, Mori Art Museum, Tokyo (2022), Artes Mundi 9, National Museum Cardiff (2021), Mercedes- Benz Art Scope 2018-2020, Hara Museum of Contemporary Art, Tokyo (2020), Aichi Triennale (2019), “Leaving Echo Chamber”, Sharjah Biennale 14 (2018), “Progress”, 12th Shanghai Biennale (2018), Future Generation Art Prize @ Venice 2013, Palazzo Contarini Polignac, Venice (2013) and “Art Scope 2009-2011 – Invisible Memories”, Hara Museum of Contemporary Art, Tokyo (2011). In 2021, he received the Grand Prize in the Art Division of the Japan Media Arts Festival. His works are in the collections of major contemporary art museums in Japan as well as abroad such as the Museum of Modern Art (New York), Tate Gallery (UK) and M+ (Hong Kong).